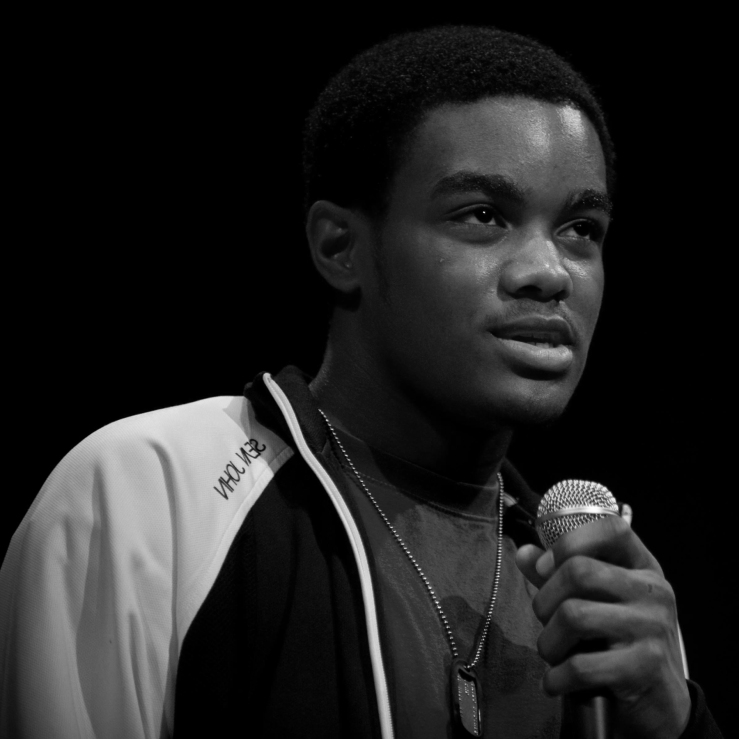 The YPT community is very saddened to hear of the passing of YPT alumnus Pete Hall. Pete died in a car accident last month, at the age of 28. He was the only child of Vicky Hall. The team here at YPT send our condolences to Pete’s family and would like to share some warm reflections of the light he shed on our lives here at YPT

Pete began working with YPT as a student in YPT’s In-School Playwriting Program at Bell Multicultural High School in 2007. His hilarious play, Keepin’ Outta Trouble, was produced in the 2008 New Play Festival. The following year, while a member of Young Playwrights’ Workshop, Pete also wrote Save ‘Da Planet Fool!—another comedic play about an environmentally conscious gang that takes over a news studio to spread their anti-pollution message. The play was then produced in YPT’s New Writers Now! Performance series.

“I don’t do serious plays,” Pete Hall said in a 2008 YPT interview. “I do comedy because I want to see people smile. There are so many things going on in the world today that make people depressed, so I like to give them something to make them laugh.”

YPT staff and teaching artists agree that Pete embodied the spirit of Young Playwrights’ Theater. Not only was he kind, positive and a talented storyteller, he also worked very hard as a playwright. “Pete was a witty, affable and humble guy,” says Patrick Crowley, Pete’s New Play Festival dramaturg at Bell. “His play really stood out, but he never let his ego swell. He was great to work with and [accepted] notes on their merits and did not take them personally.”

His play, Keepin’ Outta Trouble, stood out as one of the strongest and most entertaining plays to be crafted from YPT’s In-School Playwriting Program. The story centered on the relationship between mother and son, inspired by his real-life, close relationship with his own mother, Vicky. YPT has since published Keepin’ Outta Trouble in Write to Dream, an anthology of some of the best work created by YPT playwrights since 1995.

“For a student in the throes of adolescence to invite us to laugh with them, and sometimes at them is a profound stroke of artistry,” says Pete’s In-School Playwriting Program Teaching Artist, Elizabeth Zitelli. “It was a remarkable show of strength—to look at what he was going through, to hold it all in a loving gaze of amusement and then invite us in for a view. This is what the best artists do.”

Since graduating from YPT’s program over 10 years ago, Pete had since moved to California and began exploring screenwriting at California State University, Northridge. He had planned to return to school this fall. Here at YPT, his absence is felt, but his memory will always be inspiring.

“For such a young man, he is leaving behind quite a legacy of lives he touched and art he created,” says YPT Executive Director Brigitte Winter. “ I’m honored we were a small part of his story.”

YPT is proud to honor Pete’s legacy by inaugurating the Pete Hall Promising Playwright Award in our *25th Anniversary Celebration at Arena Stage on April 27, 2020. This award will recognize a current young playwright who exemplifies hard work, commitment to craft and the power and impact of youth voice.

*As of March 2020, the Pete Hall Promising Playwright Award will be presented at our first-ever virtual event, Tell It Forward: The Power of Stories to Shape Our Future.