As we count down to YPT’s big fifteenth birthday celebration next week (Come share birthday cake with us at the Express Tour Showcase, November 3-6!), we would like to take you on a journey into the past – all the way back to 1995, the very first year of Young Playwrights’ Theater.

In 1995 Karen Zacarias returned home to Washington, DC with an MFA in Playwriting from Boston University and a desire to use her art to make a difference in her community. She began volunteering her time providing free playwriting workshops to students at Bell Multicultural High School and Fillmore Arts Center. By 1997, Karen’s workshops were so successful that she incorporated Young Playwrights’ Theater as a nonprofit organization, employing a full-time staff and teaching playwriting and theater arts at schools and community centers throughout DC. Fifteen years later, in 2010, YPT is a nationally recognized theater education company, serving 1,000 students annually throughout the Washington, DC region.

1995 was quite a year. The cost of a gallon of gas was $1.09, the Republicans controlled both chambers of Congress, Brave Heart won the Academy Award for Best Picture, O.J. Simpson was found innocent, POGs were voted most popular toy, Alanis Morissette’s Jagged Little Pill was Album of the Year, Jerry Garcia died, and the Atlanta Braves won the World Series. Over the next week, YPT will take you back in time to 1995, celebrating the good, the bad, the inspiring and the just-plain-hilarious of the early ‘90s.

To kick things off, we are pleased to present some juicy gems from the personal history of YPT’s staff. You saw it here first, folks – the fifteen-year-old professional biographies of YPT’s current company members…

David Snider, Producing Artistic Director and CEO
In 1995, David is a professional actor in New York, having just finished a season Off-Broadway with the Jean Cocteau Repertory, including The Cherry Orchard, Hamlet, The Country Wife and the US premier of Napoli Milionaria. Recently chosen by legendary producer Rosemarie Tischler to be in the inaugural class of the Shakespeare Lab at the Joseph Papp Public Theater, David is spending the summer training with Christopher Walken, F. Murray Abraham, Bill Irwin and Irene Worth, among others. He’s praised in an article written by a new writer on theatre for the New York Times, Peter Marks. He hopes to attend the NYU Graduate Acting Program next year. He often temps to pay the bills, spending his days photocopying and faxing – and dreaming of the days when he’ll do something more meaningful with his life. Whenever possible, he tries to look busy – while getting paid to read Shakespeare at his desk.  He’s quickly realizing that he really wants to be in charge.

Patrick Torres, Associate Artistic Director
In 1995, Patrick is busy managing all of his futile crushes and dreaming of getting out of Odessa, Texas. He is proud of his decision to boycott prom and is looking forward to college where people see theater as a valid art form and the ratio of females to males is 5 to 1. To this day he remains a dreamer.

Brigitte Pribnow Moore, Development Director
In 1995, Brigitte lives in Connecticut with her mom, two brothers, a dog, two cats, two gerbils, a rabbit, and a hermit crab named Dennis Nedry. An over-eager seventh grader, Brigitte recently voluntarily turned in an unassigned book report on Les Miserables (the unabridged version). She dreams of participating in the eighth grade field trip to Washington, DC, where she hopes to visit the love of her life, Fox Mulder, in the basement of the FBI building.

Nicole Jost, Program Manager
In 1995, Nicole is a student at Janney Elementary School in Washington, DC. She enjoys spending recess sharing secrets with her best friend, a.k.a. “dishing up stuff.” She is a feminist and a semi-vegetarian, and her favorite food is anything made out of chocolate. Her greatest wish is to be 17, when she knows she will have a cute boyfriend and have figured out her whole life.

Raina Fox, Community Engagement Associate
In 1995, Raina enjoys climbing trees, being out in the Portland rain, making crafts, camping, and putting on plays with her friends and siblings. She is currently working on her first screenplay, based on the board game “Candyland” and featuring several original songs never to be released. An avid reader and artist, Raina is honing her creative skills to become a children’s book author/illustrator when she gets older. Her favorite book is A Wrinkle in Time, which she reads under her desk during math class, knowing that ultimately this knowledge will prove far more useful than multiplication tables. She is correct.

Liza Harbison, Communications and Graphic Design Assistant
In 1995, Liza is hard at work learning cursive after a successful education in coloring inside the lines. She enjoys rollerblading, playing Oregon Trail and making forts out of blankets and chairs. Liza hopes to one day own 50 dogs and work with orangutans. Not much will change.

Alison Beyrle, Development Assistant
In 1995, Alison has just begun third grade at Janney Elementary School.  She is involved in activities such as soccer and Brownies, and recent accomplishments include selling enough Girl Scout cookies to earn a t-shirt and writing a story with chapters in her class writing workshop.  In her free time Alison enjoys reading, especially Babysitters Club books, writing, soccer, drawing, watching Legends of the Hidden Temple on Nickelodeon, and baking with her E-Z Bake Oven.  Next up, Alison will be moving to the Czech Republic thanks to her parents, who work for the Foreign Service.  She writes them an angry letter protesting this move, but will probably end up appreciating it years later. 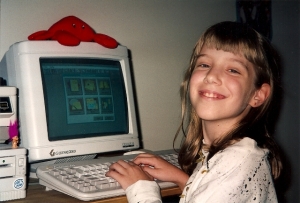 Laurie Ascoli, Program Assistant
In 1995, Laurie lives in Rhode Island with her parents, big brother and new kitten, Casey.  She dreams of being an author one day and has already received two awards for her novella “The Journal of a Stuffed Pig” as well as for the “Just Say No” play she wrote for her DARE class and performed at an assembly.  In her spare time, she enjoys reading the Babysitters’ Club series, watching TGIF, playing Donkey Kong Country on Super Nintendo, and pretending to be Harriet the Spy.  She is delighted to announce that she will be making her stage debut in the fall as Melinda in Inherit the Wind, performed by the Middletown High School drama club and directed by her dad.

Feeling brave? We dare you to send us your photos and memories from 1995 (Email to bmoore@yptdc.org!). The best submissions will be displayed in the lobby on the opening night of the Express Tour Showcase, on November 6.